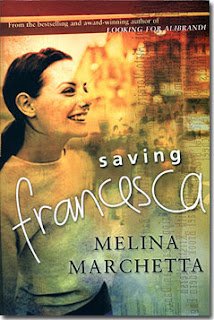 This is a fairly emotional and fangirly Melina Marchetta Appreciation Post.

Warning: if you’re the kind of person who isn’t affected by books or fictional characters in general and frowns upon the people who are, you really shouldn’t read any further.

I think I first read Looking for Alibrandi when I was about nine or ten years old, a year before Saving Francesca came out. I was too young to really understand it all completely, but as a second generation Italian, I thought I’d found true love in the form of a book that actually described various aspects of my life that I’d never quite been able to articulate properly. For example, I will be eternally grateful that Looking for Alibrandi brought into the Australian consciousness the phenomenon of Tomato Day and gave it a name, because all my friends now actually have an idea of what I’m talking about (and it makes Grape/Wine Day far more easier to explain).

As much as I adored Looking for Alibrandi back then (and I still do – though in 2011 some of Josie’s issues feel dated), I realised as soon as I started reading it that I’d found a greater love in Saving Francesca. It’s one of those books we probably all have, the book we can pick up at any time and open at any page and know exactly what’s going on, but still discover something new with each re-read.

It’s now been 8 years since I was first introduced to Francesca, Tara, Siobhan, Justine, Thomas, Jimmy, Will and the rest of the girls and boys at St Sebastians, and I don’t quite know how to explain just how much they’ve come to mean to me in that time without coming across as a lunatic (I sort of tried once here).

I remember walking into the bookshop opposite David Jones at Westfield Miranda and begging my mum to buy me Melina Marchetta’s new book. She obliged and, usually unhappy when shopping with my parents and sister, I sat content outside countless shoe stores and clothing outlets reading, unable to put the book down. I feel like that’s kind of a metaphor for my relationship with Saving Francesca in general: there’s nothing I can’t face, no matter how much I dislike it, without Francesca and her gang.

It’s not that I haven’t got wonderful friends of my own, because I do (though the level of obsession with various films and TV shows I’ve displayed in previous posts really goes to show the opposite). But just like the millions of kids who wish they were friends of Ron, Hermione and Harry at Hogwarts, a part of me has always wanted to be at St Sebastians, and be part of that group.

This feeling only grew with the release of The Piper’s Son. Let’s just say that book stomped on my heart and broke it. Into a million pieces. And then managed to painstakingly put it back together again. Since 2003 I’ve wondered about these characters and how they are; reading Saving Francesca’s sequel last year and seeing how their lives had turned out – and generally, when we first encounter them again, they’ve all taken a turn for the worse – was hard.

Francesca and Will are spending more time apart. Siobhan is overseas, as is Tara. Jimmy is AWOL. Thomas Mackee is estranged from the group, dealing with a family tragedy. I think of these characters as real people who are all close to my heart, and it hurt me to see them hurting. It hurt to shift from the familiarity of their world in Saving Francesca, a world I’d known for eight years, and realise that things are different for them now. In the end though, it all turned out perfectly. It had to. Because it’s Melina Marchetta and she loves her characters as much as the readers do.

Another kind of exhilarating heartbreak comes in the form of On the Jellicoe Road. It’s an odd way to describe it, I know, but it seems to fit. Taylor, Raffy, Jonah and Santangelo, as well as the old gang, are two other sets of friends that I’ve always longed to be a part of. It’s true love with this book, too (and the fact that Ben the violinist made an appearance in The Piper’s Son? IT MADE MY BOOK YEAR), in an emotionally draining kind of way.

I feel I could rave on and on about Melina Marchetta for days, relating a decade-worth of personal memories and stories that correlate to her books and her perfect characterisation and beautiful way with words and tapping into the minds of teenagers and adults alike.

But for all of our sakes, I won’t. I’ll just leave it here and say I want to thank her for giving me these wonderful friends.

Original post can be found at Gina's blog: Melina Marchetta Appreciation Post
Posted by A.J. at 9:16 AM