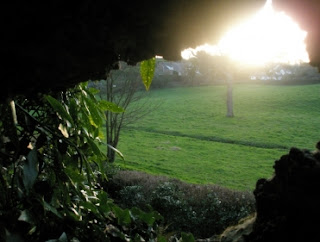 On her blog, Melina Marchetta updated us on her travels in Europe, which helped with the setting in Quintana of Charyn. She even included some really interesting photos, like the one posted above, that showed how she imagined some areas and buildings in the novels. (The LE MONT picture was cute!)

At the end she had some answers for the Lumatere Chronicles that readers are definitely interested in knowing about:


"QofC will end the current story. There is no new Lumatere Chronicles in the works, but I think I may write a short story or two about the secondary characters.

And then if I let my imagination wander, I think of Jehr in Yutlind Sud. And whether the Osterians are really as boring as the Lumaterans and Charynites think they are. And if one day the whole land of Skuldenore has to band together because they'll be attacked by offlanders. And of course those bare headed novices in Sendecane."

Trying not to squee over that last paragraph. All we know is that whatever comes next, we'll devour read it. We'll read anything you write, MM!

(Please do not continue reading this post if you haven't read Froi of the Exiles or don't want to know anything about what happens in Quintana of Charyn! Just giving a fair warning!)

Finally, thanks to the power of Google, we have this quick description of Quintana of Charyn to share:


"QUINTANA OF CHARYN takes up where FROI OF THE EXILES leaves off. Froi and his companions travel through Charyn searching for Quintana and building an army that will secure her unborn child’s right to rule. While in the valley between two kingdoms, Quintana of Charyn and Isaboe of Lumatere come face to face in a showdown that will result in heartbreak for one and power for the other." [Source]

And going by what's said on GoodReads, QoC starts three weeks after the ending of FotE. The release date in Australia is set for October 2012 and March 2013 in US.