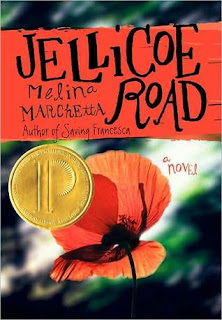 "I finally handed in my Jellicoe script and I think (hope) that it’s pretty much all there. Next week we have a read-through with actors (by no means a film casting exercise) which is the final step to the Screen NSW Aurora Workshop we were invited to be part of earlier this year."

That's only a glimpse of Melina Marchetta's newest update on the On the Jellicoe Road film script! To read the entire post and to read what she has to say about her fans and recent novels, check out her blog post on GoodReads.

We are definitely excited! So, which actors can you see as the characters? Which scenes are you hoping make it into the film? Tell us your thoughts.

And we can't end this post without including reactions from some fans. (Imagine what the reactions will be like when/if the film is finally released!)


"I can't wait to hear more on "On The Jellicoe Road"! It is so exciting hearing all the gossip behind it! Thank you so much for bringing my fantasy world more to life - I don't know what I would have done without Jellicoe Road and Froi .etc. You truly have me addicted to your work and I just hope you know how much everyone loves you for your personality and talent! =)" -Kate

"Best of luck with it all! Just a side note: as it happens, I watched 'Looking for Alibrandi' for the first time this afternoon, though I have read the book several times. It was great, and it never ceases to amaze me how you capture the teenage voice without belittling us or making us sound 'angsty.' Great work!" -Blake

"I can barely imagine how brilliant it would be like see the Jellicoe characters brought to life. I still remember reading it for the first time and thinking about it for days afterward. I hope the script reading goes well. Best wishes!" -Tina

"I’m trying to stuff down the threatening ‘squee’ that’s about two seconds from spilling. And they’re not even filming yet! What’s even worst is the thought that Jellicoe Road might not even have a North American release! It doesn’t matter. Heck, I’ll fly to Australia just to see this movie. I’m not even joking.

I’ve been on tenterhooks, anxiously waiting to see which actors will play these characters we’ve come to love.

I know this film is still on a hatching stage, but I can rest easy knowing that Ms. Marchetta wrote the script and will remain genuine to the book. I’m so freaking excited!" -Joy
Posted by Unknown at 6:14 PM