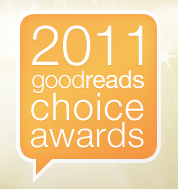 Today is the start of the opening round for the 2011 GoodReads Choice Awards! According to GoodReads, there will be a total of 3 rounds of voting. All votes will be for books originally published in 2011. So, even though The Piper's Son was released in 2011 in the US, it is not eligible for voting since it originally came out 2010 in Australia.

Since Froi of the Exiles was released this past October in Australia, we can vote for it! Here are categories FotE and Melina Marchetta can be voted in:


Melina Marchetta and Froi of the Exiles are "Write-In Votes." The top 3 write-in votes will be included in the ballot. Here's how to do a write-in vote: 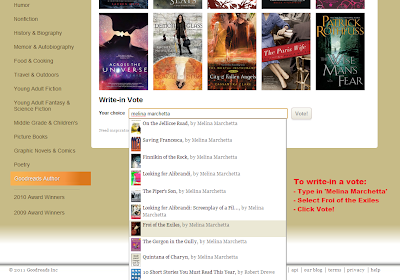 Or you could just type in 'Froi of the Exiles,' whichever works for you.
Just like with the PengTeen Awards, if you haven't read Froi of the Exiles you can always vote for Melina Marchetta in the Best GoodReads Author category. :)
Posted by A.J. at 4:07 PM

Email ThisBlogThis!Share to TwitterShare to FacebookShare to Pinterest
Labels: awards